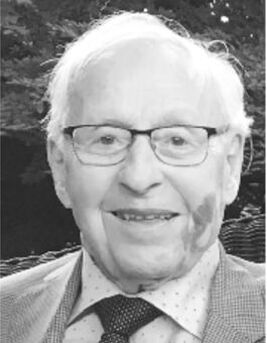 After a long, productive and adventurous life, Dr. Leslie R. Chasmar passed away peacefully at his home in West Vancouver on September 9, 2019 at age 95.

Possessing almost limitless energy and enthusiasm, Les had a zest for life and learning-a quality that he brought to both his personal and professional life.

Born in Saskatoon, Saskatchewan in 1924 and raised in Hanley, Les went to work at age 14 to help support the family after his father passed away.

​It was during these years that he first learned to work with his hands as an auto mechanic, theatre projectionist and bank teller, developing his entrepreneurial instinct along the way. In 1942, he enlisted in the Royal Canadian Air Force and served as a Flight Instructor at Fort Macleod and Calgary until his discharge after the war.

He subsequently completed pre-med studies at the University of Saskatchewan and medical school at McGill University. He originally intended to go into general practice, but a stint in burn research at the Toronto Hospital for Sick Children inspired him to pursue plastic surgery. Les completed his General Surgery and Plastic Surgery training in Montreal and Toronto and, in 1956, graduated from the Plastic and Reconstructive Surgery Division of the University of Toronto. In 1957, Les was appointed Head of the Plastic Surgery Division at the University of Saskatchewan.

This was the beginning of his remarkable 52-year career where he proved himself an outstanding surgeon and a true ambassador for the profession. Colleagues described him as a meticulous and artistic innovator-a surgeon's surgeon who taught and practiced with passion, integrity, humility and an unrelenting attention to detail, focusing on his patients surgically and personally. Oft published and recipient of numerous awards, including the Canadian Society of Plastic Surgeons' Lifetime Achievement Award, he leaves a legacy of leadership, training, and mentorship.

In 1964, Les and Dr. Chuck Knight started the first Plastic Surgery Residency Program in Western Canada at University Hospital in Saskatoon. By 1992, Les had trained 17 plastic surgeons who have had successful careers, continuing his legacy of quality care and teaching future generations. With increasing demand for cosmetic surgery, Les and three colleagues established Saskatchewan's first surgical outpatient clinic in Saskatoon. The clinic enabled medical residents to get six months of training in cosmetic surgery following their residency. The availability of new and well-trained surgeons significantly reduced wait times in the province.

Les was always happy to offer his skills freely and, with wife Pat, volunteered with CARE/Medico in Surakarta, Indonesia (1973) and Kabul, Afghanistan (1976) where Les trained the local doctors, who observed his operations, especially cleft lip/palate procedures. After retiring from teaching and surgery in 2009, aged 85, Les moved with Pat to Vancouver.

Les's personal life was as active and fulfilling as his professional career. Les married Marjorie Rennie while at McGill, and they had four children. Sadly, Marjorie died just a month after the birth of their fourth child. Later, Les married Patricia Pirie who had been a close, long-time friend of them both. They had a son and raised their children in Saskatoon.

One of Les's lifelong passions was flying-he never missed an opportunity to fly a plane, attend an air show or tour an aircraft museum. Les was also an avid tennis player, downhill skier and overall fitness aficionado. As recently as 2016, he participated for his 7th year in the annual Vancouver 10K Sun Run! For 10 years until age 92, Les organized an annual heli-hiking trip with his family in the Purcell Mountains. Les and Pat travelled extensively for medical conventions and, other times, to simply enjoy life with family and friends.

Everyone who knew Les has a story of his considerate nature, his warmth, his charm, his sense of humour and his ever-positive attitude. He is survived by his wife Pat, children John (Cydnee), Ann (Michael), Hugh (Kathleen), Jean and Robert (Grace) and grandchildren Elizabeth and James; Rennie and Robbie; Katherine, Maggie and David; and Matthew.

​We will all miss his love, care, stories and laughter, but are grateful he was with us for so many years.

In his memory, donations may be made to the Dr. Paul Sugar Palliative Care Foundation or the BC Cancer Foundation. A private gathering will be held in his honour.
memorial donation