IN MEMORY OF ARCHIBALD THOMAS KAY 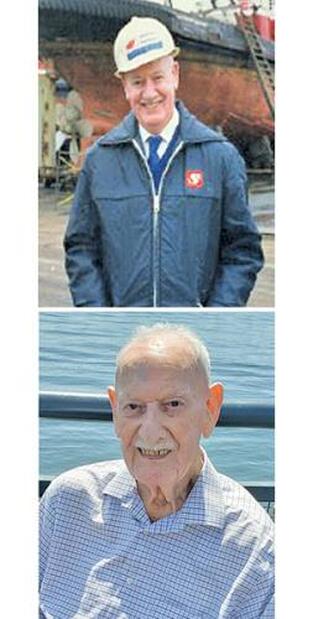 It is with great sadness that we note the passing of Archibald Thomas Kay of West Vancouver at the age of 101 years old.

Archie was born in Mauchline, Ayreshire, Scotland, the son of Archibald Hay Kay and Helen Witherington Wright. He was educated in Glasgow but returned to Mauchline for the summer holidays where he worked part time at the family business of cutting granite blocks and shaping them into Curling Stones. Archie's Uncles held a patent giving them exclusive rights to a machine that would accurately shape the blocks into the perfect parabolic shape required for curling stones. The Kay factory has always been a leading manufacturer of curling stones since the late 1800's and have produced most of the curling stones used in the Olympic Games.

Archie was keen on all outdoor activities and most weekends would head off in his kilt and anorak to roam the hills, glens and lochs of western Scotland.

​As a young man Archie was Apprenticed to a Heating and Ventilation company in Glasgow where he worked until the outbreak of World War 2 when he was posted by the UK Ministry of Defense to the Royal Aircraft Establishment at Farnborough, Hampshire. Because of his expertise in HVAC he was soon attached to a research group assigned to find a way for the RAF fighters and bombers to fly higher than their normal ceiling of 30,000 ft without the pilots becoming starved of oxygen or half froze to death. The Axis fighter planes could already fly much higher giving them a great military advantage. Over the course of the war Archie and his colleagues overcame all the technical barriers and got to fly on many of the test flights to observe first-hand their handiwork. One special project was to design and build a special pressurized pod that Prime Minister Winston Churchill could be accommodated in so that the plane carrying him could safely fly at a high altitude to his summit meetings in America and Russia with Presidents Roosevelt and Stalin. Shortly after the cessation of hostilities Archie first met his wife-to-be when she travelled from Victoria, British Columbia to visit her grandparents and cousins in Inverness. In 1950 Archie sailed from Liverpool to Vancouver on board the SS Lakonia. The ship made cargo stops along the Caribbean coast before sailing through the Panama Canal and up the West Coast. Archie was one of only two passengers on board.

After arriving in Victoria he sought out Margaret Dykes - the young woman who had caught his eye when they had met earlier in Scotland - Margaret soon became Mrs. Margaret (Peggy) Kay. Archie found a job as an Estimator at The Victoria Machinery Depot and was soon working directly for Harold Husband the shipyard's owner who was building a new yard at Ogden Point as he had his eye on being part of the BC Governments initiative to have an independent provincially-owned ferry fleet after a ferry strike had cut off travel and supplies to Vancouver Island. Archie did the cost estimates for the very first BC Ferry - mv.Sidney (later to be renamed Queen of Sidney) and a dozen more, progressively larger, new ferries which were to be built at VMD. Archie also played a key role in the design and construction several Destroyer Escorts and Minesweepers ordered by the government for the Royal Canadian Navy. VMD somehow managed to fit into its program the construction of the largest Floating Drill Rig in North America (the Sedco 135) which dominated the Victoria skyline for several years as it was assembled. When VMD closed its doors in 1968 due to a severe downturn in the world economy,

Archie and Peggy moved to Vancouver where Archie joined the Ship Design and Estimating team of Burrard Drydock. Archie did not care for the heavily unionized atmosphere at BDD and when an opportunity arose for him to join the Management team at Vancouver Shipyard in 1970 shortly after they had opened a new shipyard on Pemberton Avenue as they moved out of their long time home in Coal Harbour. Archie fitted right into the new yard arriving as the company secured many orders for new ferries, ferry and cruise ship conversions, powerful tugs and large barges.

When Archie was 65 he was faced with a company Mandatory Retirement policy and retreated to their home on Madrona Drive in West Vancouver but soon became bored and took up a consulting position helping Nanaimo Shipyards on Vancouver Island to build up their business. Archie also consulted to Vancouver Shipyards and was part of the BC Ferries expedition to Tasmania to help with the transfer of the Australian technology used in the Fast Ferry Program.

Archie had a wide network of colleagues and liked nothing better than to have lunch at the Park Royal White Spot with his long time friends Ron Roberts, Lionel Mitford and Gordon Fenwick After Peggy's passing in 2017 Archie moved into a suite in the Amica complex on Clyde Avenue and started to develop a new circle of friends. He became special friends with Christine Hanson and during the Covid Lockdowns she became his designated visitor and Archie's close companion She and Archie would often have lunch at Christine's home in Deep Cove.

Late in the evening of April 24, 2021 Archie suffered a stroke and passed away shortly afterwards at Lions Gate Hospital. He was cremated at the Boal Chapel and his ashes will be laid to rest alongside those of his wife at Hatley Park Cemetery in View Royal Victoria.

Special thanks to the staff of Amica and the doctors and nurses at Lions Gate Hospital and to his friend and physician Dr Paul Sugar.

Because of the Covid restrictions no memorial service will be held but a small get together of his close friends will be held in the near future to take a wee dram or a small tot in Archie's honour.