In memory of Arnold James Little 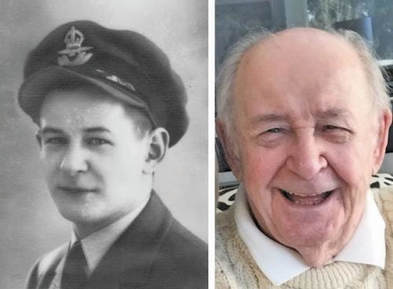 LITTLE,
Arnold James
Arnold James Little, died peacefully and painlessly in Lions Gate Hospital, North Vancouver, on December 31, 2016, with his two daughters by his side.

Arnie lived a long, healthy and independent life, maintaining a vibrant and inquisitive mind until his death at 92 from lung cancer. He was lucid and witty to the end, his dry sense of humour never deserting him.

As a World War Two combat veteran, he flew one tour of duty (35 missions) on Halifax bombers as an air gunner with RCAF 426 Squadron. After the war, he returned to Winnipeg, where he became Secretary Treasurer at Feed Rite Mills. A very creative person in most aspects of his life, Arnie was a graceful dance instructor at Arthur Murray Dance School, a talented painter and an avid gardener. He devoted many years to building an elaborate Japanese garden at his home in Winnipeg. However, his most enduring passion was cooking and entertaining. He really loved to throw a great party, flying fresh lobster in from the east coast, or hosting picnics in the Arizona desert, or digging pits to roast whole pigs, or menu planning for his annual fishing derby, or giving away copies of his recipe book. He was passing along recipes and cooking tips almost to his last breath. Because Arnie was very generous to his friends and family, nothing was too much trouble.

He was predeceased by his two brothers, Ross and Ray Little. He leaves behind his sister Ruth Boston, daughters Andrea Westcott and Tara Kobewka, sons-in-law Doug Westcott and Dale Kobewka, grandchildren Will and Ana Westcott, and Rya Kobewka, and numerous nieces and nephews. Arnie will be deeply missed.

​We would like to express our heartfelt thanks to his personal trainer, to his computer "geek," and to his dear friends and neighbours who helped and supported him so unstintingly over the years. Thank you to Lions Gate Palliative Care Team, with eternal thanks to Dr. Paul Sugar.

In lieu of flowers, a donation in Arnie's name to the Paul Sugar Palliative Support Foundation or to the Lions Gate Hospital Foundation would be gratefully appreciated.