In memory of George Cook 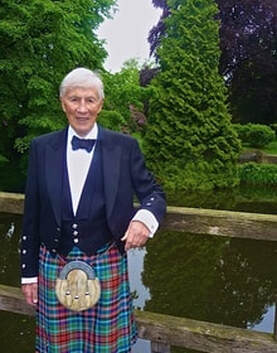 After a long, courageous struggle with cancer, George passed away peacefully with his loving wife, Birgit by his side. Along with his beloved wife, Birgit, he is survived by his elder brother John, his children John, Birgitta and Gordon, grandchildren Alexander, Anna, Nicki, Madeleine and Birgit’s daughter Birgitta.
​
George and Birgit truly enjoyed their wonderful circle of friends, and George was often the center of attention at any gathering. He generously shared his amusing stories and jokes, recited poetry and often sang a song or two.
​
​He was a real gentleman who always put others before himself, a wonderful man – kind, intelligent, wise and so much more.

George was born in Calcutta, India, to George and Katherine Cook (née Gauss). The family returned to Scotland, where George completed his formal schooling at Fettes College in Edinburgh. After his compulsory National Service, he joined The National Bank of India, following the career path that his father, as well as his grandfather, had enjoyed. Upon completion of his introductory training in the bank, he was assigned to Bombay, India. During his career he held positions in various locations in India including Amritsar and Calcutta. He was later based in Uganda, Africa, and worked in Mombasa, Aden and other locations. After the bank’s amalgamation with a larger group, George held director positions in London, New York, Toronto and Stockholm, where he met Birgit. In 2004, George and Birgit moved to West Vancouver, B.C. Canada, but for many years they returned to Sweden for four months every summer, living in their lovely country house, spending time with family and friends.

Special thanks to Dr. Paul Sugar, Dr. Marylene Kyriazis, Sue Hills, Wendy Lea, and the Coastal Health Team, as well as numerous friends, for all your care and support for both of us.
​In lieu of flowers, please send donations to the Paul Sugar Foundation.