in memory of marvin childs 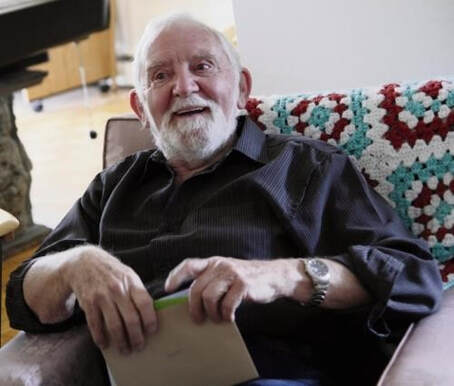 On February 4, 2022, Marvin Childs died at home, with his daughters Mary and Lesley at his side.
Marvin and his twin sister Maureen were born in Cumberland, BC, to Robert (Bob) and Gwen Childs.
After high school Marvin spent a year at Victoria Normal School, before starting his teaching career as a teenaged principal of a two-room school in the Arrow Lakes. He spent a few happy years there before taking a position at Gleneagles Elementary, in West Vancouver. He taught in West Vancouver until his retirement, at Caulfield, Eagle Harbour, and Irwin Park elementary schools. For many of those years he was a principal.

​In the 1950s Marvin taught for a year in England, and won the heart of the vice-principal, Ruth Johnson, who followed him to Canada in 1960. They married and had two daughters, Mary and Lesley.

Marvin and Ruth were avid bridge players and active in the congregation of St. Stephen's Anglican Church. Marvin loved to play tennis, and in winter kept a broom in the car to sweep snow off the courts. He was also a keen traveler and organic gardener. Marvin retired in 1985; Ruth died that September. A couple of years later, Marvin went to Japan for what was supposed to be a few months of teaching at Rikkyo Ikebukuro Junior High School. He stayed in Tokyo for ten years and, in addition to teaching, took up bartending and modelling. He moved back to West Vancouver in 1996 and had a busy life of bridge, dogwalking, volunteering for the Friends of the West Vancouver Memorial Library, and attending aquafit classes.

Early in the Covid-19 pandemic Marvin moved in with Lesley, her husband Junji, and their son Trevan, in North Vancouver. Under Dr. Sugar's care, he remained there until his death.

Marvin was a warm, kind, and good-natured man with a quick wit and positive attitude. It was common for him to be greeted enthusiastically by former pupils who recalled him fondly from their school days. He was an affectionate and beloved grandfather to Trevan and to Mary's son, Isaac.

In lieu of flowers, donations may be made to the Paul Sugar Palliative Support Foundation or the Cancer Research Society.
MEMORIAL DONATION