In memory of Margaret Edith Kay 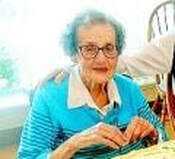 Depression times of her early years were hard for all families but she picked fruit and seal- packed frozen vegetables to pay for clothes and piano lessons becoming skilled at sight reading music. Later she played the organ in the same church she was married in, in 1950. She started work in her teens in the Parliament Buildings, promotion from the Vehicle department through adeptness with figures led to financial work, a position in Probate, then known as a man's job. She was a lifelong member of the Beta, Sigma, Phi Sorority. Her hobby was gardening to "Masters" standard becoming president of two garden clubs, one while living in Victoria, the other in Vancouver. Fuchsias and Begonias were her prize specialties. She was requested to give talks on many occasions to other garden clubs. Domestically, she was a real chef in the kitchen, cooking seemed to become pleasure to her. Nature dictated "no family" and adoption was not a solution to her or her spouse.

A celebration of life will be held at a later date.

Sincere appreciation must be expressed to Dr. Sugar for the close attention he gave Peggy. In lieu of flowers, please donate to the Paul Sugar Palliative Support Foundation.
memorial donation