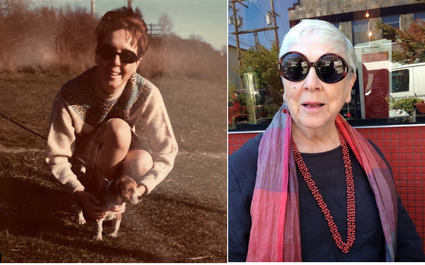 A brilliant mind has been silenced.

Marion Edith Christie McIntyre born March 25th, 1936 at Grace Hospital, passed away at Vancouver General Hospital on August 28th, 2020 with her daughter by her side.

Marion filled many roles throughout her life: teacher, archaeologist, union rep, but her finest role was as a mother.

Predeceased by her parents, Mary Joss and Jimmy Pollock, as well as her beloved grandparents, Molly and Arthur Joss, Marion spent much of her early childhood in Vancouver and Montreal; returning in the summers to Sechelt and Pender Harbour, the places she felt most at home.

Her time in Tucson remained amongst her most favorite. She loved the open skies, the Santa Catalinas, and watching her beagle Beauregard chase the mourning doves. Though she desired to stay in Arizona, Vancouver beckoned, and so she returned in 1973. The following year she gave birth to her daughter Alexandra, and resumed her teaching career. Balancing the role of wife, mum and educator, she did all three with focus, drive and dedication.  Ever active in union politics, she served a number of years on the Executive Committee of the BCTF, and taught at John Oliver Secondary until her retirement in 2000.

Finally, free of the classroom, Marion spent her retirement taking time to enjoy the small things. A good Ian Rankin mystery, dining well, and traveling.  First with her friend Joan, and later with her daughter. Our numerous trips to Seattle on the Amtrak were a highlight, as she was able to enjoy good food, wine and the theatre. These trips were particularly special to Marion in that she had taken similar trips with her mum in her youth, and was now able to share her memories with Alexandra. Her wit, intelligence and style were her hallmarks, to the very end.

Marion wanted to be remembered as good granddaughter, daughter and exceptional mother. She was all of these things and so much more. She leaves her daughter, her husband Kenneth and her beloved beagle, Bertie to make sense of a place bereft of her presence. Our world is so very empty without her.

A special thank you to the nurses in the VGH Spinal Unit for their support, compassion and care.
A memorial will be held at a later date.
​
In lieu of flowers, please consider a donation in mum’s name to the Paul Sugar Palliative Support Foundation or the BCSPCA.
memorial donation