In memory of George Maddeaux 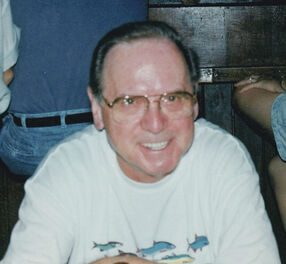 It is with sadness that we announce the passing of George Maddeaux of North Vancouver at the age of 88.  George was surrounded by family when he lost his courageous battle on September 30, 2017.

​George is survived by his devoted and caring wife of 24 years, Myra, who was always at his side.  George was predeceased by his first wife, Elizabeth, "Betty" in 1981.  He is also survived by his 4 children, Lynn (Wayne), Steve (Denise), Betty (Ken), Joan (Keith), 7 grandchildren, Leona, Toni, Bob, Mark, Diana, Lindsay, Michelle and 9 greatgrandchildren.

George moved his family out to beautiful B.C. from Montreal in July 1966 and never looked back.  His 2 greatest passions and pastimes were fishing and horse racing. He loved spending every weekend at the cabin he built in the early seventies on the shores of Sechelt Inlet and the weekdays trying to win enough money to pay for it at the racetrack.
George was restless when he hit his seventies and decided to open a wine making store with Myra in Parkgate Village which they ran successfully together for 4 years.

He will be missed by his loving family and friends but leaves us all with many fond memories. A private Celebration of Life will be held at a later date.

The family would like to thank all the staff of Lions Gate Hospital for their wonderful care of George on his numerous recent visits and to all the staff and Dr. Paul Sugar during his 3 week stay at The North Shore Hospice.

​In lieu of flowers we request that a donation be made to the `Paul Sugar Palliative Support Foundation`` in North Vancouver.